Sprint Nextel offers a free 30-day trial of its EVDO modem included in a Sony Vaio model—if you can get them honor that: James Martin of PC World spent an inordinate amount of time getting Sprint to honor a coupon expiring Dec. 30 of this year for a 30-day free trial of Sprint Mobile Broadband. He had to make multiple calls and visit a Sprint store to get the deal in the first place, and make two calls and send two faxes to get the service canceled without him being charged. Unacceptable.

That’s a strategy, not an accident, or Sprint’s internal customer support systems are incredibly poorly designed. The latter is more likely. While Sprint told Martin regarding the free sign up that representatives are being trained and should follow procedures, in the latter provided no real explanation for the charge and his problems in getting it removed.

Any decent support system shows account details when a customer’s account is pulled up, including things like any special promotions, and when they expire. The conclusion is that Sprint has terrible back-end systems, not an unusual state of things.

HP will integrate an EVDO Rev. A modem tied to Sprint service into business notebooks: Models with starting prices ranging from $929 to $2,049 will include the modem. A free month’s service is included for computer buyers who sign up for one or two years. Embedding a cell modem dramatically reduces the cost of customer acquisition, even though it means that many laptops are sold with modems that are never used. It’s still a worthwhile tradeoff for HP and Sprint, clearly, given the $720 to $960 yearly fees paid by EVDO subscribers coupled with the lack of needing subsidize $100 to $200 for a PC Card or USB adapter for those who sign up for two-year subscription. This is almost certainly substantially cheaper overall, and improves reception quality by allowing an antenna to be designed into the laptop.

Intel will ship the next Centrino platform without an option for the worldwide HSDPA 3G cell standard: The partnership with Nokia was supposed to lead to both Wi-Fi and HSDPA (GSM’s top-speed 3G offering) in a single package. Instead, when Santa Rosa launches in the second quarter of this year, Wi-Fi will ride solo. This is the end of a strategy that dates back to the first Centrino launch when an Intel executive told me that it was inevitable that Wi-Fi and cell would both find their way into the platform. Four years later, no such luck.

The bottom line appears to be dollars. Intel told InfoWorld that laptop makers don’t want to pay to have HSDPA integrated in every machine. Intel will consider adding 3G in future platforms, however. Specific manufacturers have chosen to include EVDO and HSDPA embedded in their laptops, but that increases cost and requires consumers or businesses to order specific models.

The upshot is that the cell networks lost the chance to avoid subsidizing hundreds of thousands or millions more PC Cards and ExpressCards, and gain a new audience that could flip a switch to gain cell data service.

The HP Compaq nc6400 features worldwide UMTS, HSDPA: Cingular’s card allows the device to work on US 3G frequencies and others worldwide. Some PC Cards are quint-band; this one, tri-band. The laptop will run about $1600 and ship in late December. Cingular’s DataConnect Global plan for $110 or $140 per month includes a certain amount of cell data access and reduced metered pricing in many countries outside the US, while including “unlimited” domestic US access.

Silicon giant Intel partners with Nokia to put cell data modems on motherboards: Nokia will manufacture HSDPA modems that will be embedded in Santa Rosa motherboards, Intel said last week, which is the next generation of Centrino. Santa Rosa will encompass 802.11n, the Core 2 Duo processor, improved graphics performance, and other upgrades; it will ship in the first half of 2007. 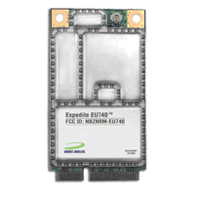 The EU740 is an embeddable PCI Express Mini Card handling HSDPA: These cards are designed for OEMs, or manufacturers of equipment. A Dell or HP would purchase the EU740 from Novatel as a standard feature or add-on option for laptops that use the PCI Express bus. This bus is the wave of the future, no exaggeration, with much higher performance and better parallel operations. It’s found in many of the newest laptops and some desktops that use Intel Core chips, such as Apple’s new MacBook Pro, iMac, and Mac mini models, and laptops from Dell and others.

The press release merely points out that the EU740 (and the U740 PC Card) have received certification from a global organization.

Verizon has added pay-as-you-go service for Dell, Lenovo, HP laptops with embedded EVDO: If you’ve bought a laptop that has the EVDO card included, you can try before you buy by purchasing a one-day pass at $15 for 24 hours. No limits are data transfer are noted. It’s an interesting idea, because $15 is a bit pricey for one day, but it’s a painless way to test before ponying up $60 to $80 per month for unlimited monthly service. [link via TechDirt]

Intel will work to add SIM card authentication for 3G, Wi-Fi to laptops: They’ll work with the GSM Association to incorporate necessary support to allow this standard module used around the world for network authentication to work in laptops without modification. SIM cards have been used as far back as 2002 in tests in which adapters were authenticated (and billed) across a network by using a SIM module plugged into Wi-Fi cards. (EAP-SIM is the protocol used to incorporate this within an 802.1X framework.)

Certain Lenovo ThinkPads will have built-in Cingular UMTS and HSDPA starting in March: The laptop maker builds on its earlier announcement of an Verizon EVDO modem. This is the latest in a series of agreements among cell operators and laptop makers (Dell, HP, and Lenovo, notably) to incorporate unactivated cell data modems into gear.

Buyers of high-end equipment won’t necessarily pay extra to get a model with integrated cell data. They’re more likely to activate it, of course, than if they had to spend $100 to $250 to get a PC Card, manage its driver separately, go to the operator for technical support, and not get a deal for trying it out.

Update: On Thursday, HP revealed something they’ve been whispering about for two months: Verizon EVDO will be built into its Compaq nc6140. It’s just $1,400.